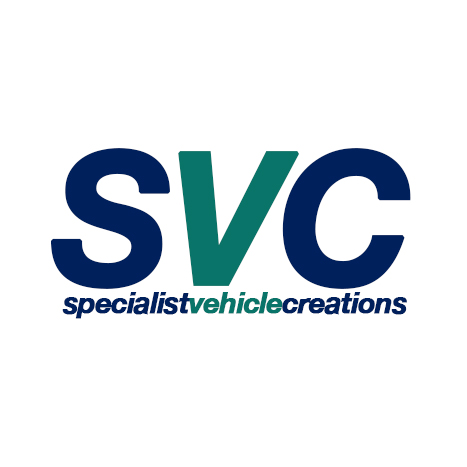 Welcome to your Austin A30 Build. Please answer the following questions to allow us to tailor and finalise your vehicle project.

Let us know the basic requirements for your vehicle.

We’ll help you pick and choose all the essential options for your vehicle.

Make any special requests you might wish, anything we haven’t thought of!

The Austin A30 (AS3 or A Series body 3) originally came in Dove Grey, Austin Seven Grey, and Cotswold Beige (1950 issue). Trim was universally either brown or powder blue/beige.

From mid July 1952, Selsey Blue, Sedgemoor Green, Sandown Fawn, and Shaftesbury Grey were introduced as paint colours, all with beige trim. To confuse matters further these colours were then renamed Airway Blue, Radio Grey, and Elizabeth Grey Green. Black car with beige trim was added as an option in late Autumn 1952.

In 1953 a Black car with Red trim was introduced.

In late April 1954 more cars were introduced for the Coronation, as the prior options were phased out:

This range continued until the end of AS3 production in October 1953.

From 1953 the AS4 was produced; this was very similar, but the bodies changed factory and a 2-door version, the A2S4 went into production. Most of these were black. In 1953-54, several AS24 were produced with contrasting roofs. For example: Coronet Cream with Red or Sandringham Fawn roof; Balmoral Blue with Windsor Grey roof; Chelsea Grey with Medium Blue roof; Sandringham Fawn with Coronet Cream roof; Medium Blue with Chelsea Grey roof; Windsor Grey with Balmoral Blue roof.

A considerable number of A30s were trimmed in hide to special order, although it was only a very small proportion of total production. The normal trim was in leathercloth.

The A35 was launched at Earls Court Motor Show on the 2nd October 1956, with a larger engine of 948 cc and the gearbox had a remote-control gear-change. On the body side the radiator grille was now painted with a chrome-plated surround. The other distinguishing feature was the enlarged wrap-round rear window.

It was available in five versions, Saloon 2dr & 4dr Countryman, Van and Pick-up, and was known as the 5 series. Production which had started in September 1956 continued till Spring 1959 for the Saloons.

It had indicators instead of the previous trafficators. Capri Blue was allegedly introduced as a colour.

Please indicate which colours (you may specify more than one, or only one, colour) you would like your vehicle to be finished in. Click on the images to view the colour names. Please note, these are 60 year old paint codes so they represent our best guess as to the colours in some cases. It will be unlikely that we’ll find a vehicle in original factory finish as a respray will almost certainly have been undertaken in this timescale. However this represents a starting point and as long as we continue to refer to the colours as set out here, we will get it right for you! 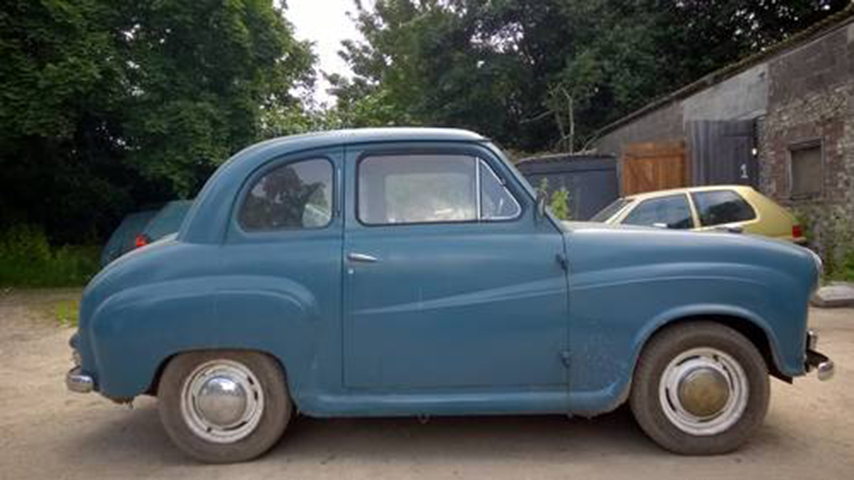 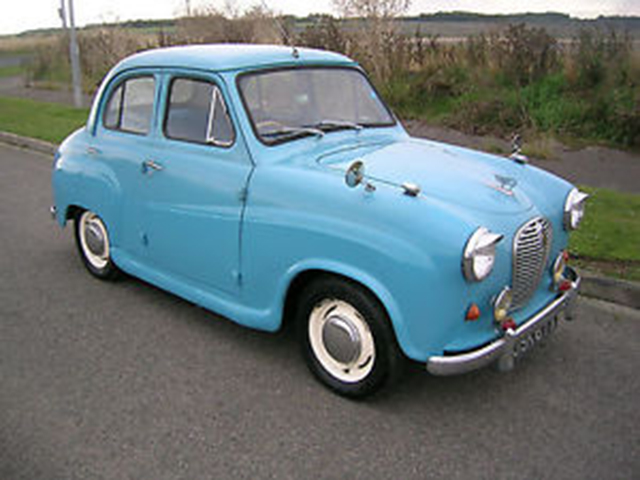 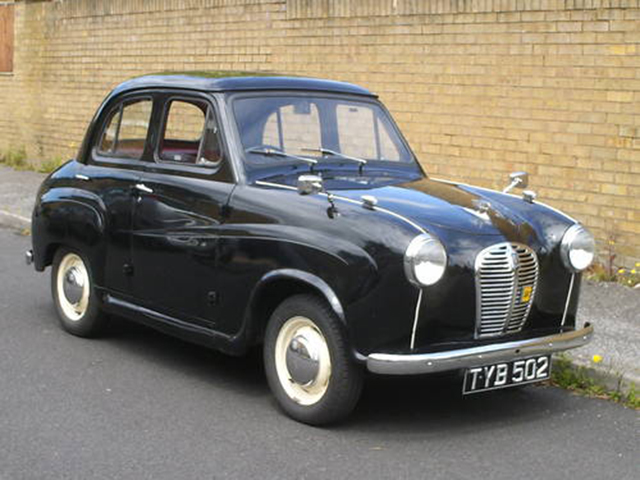 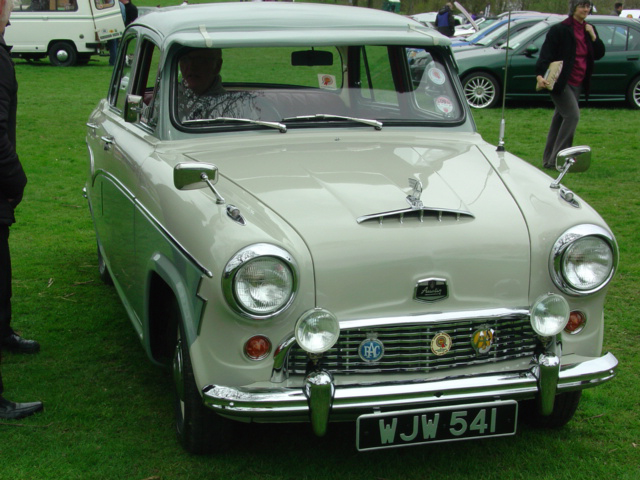 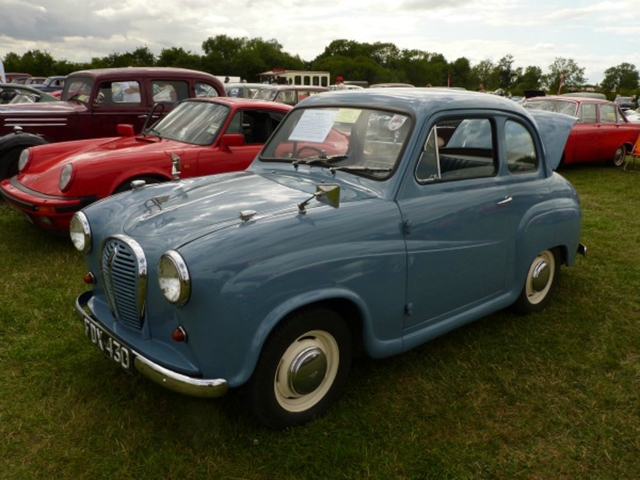 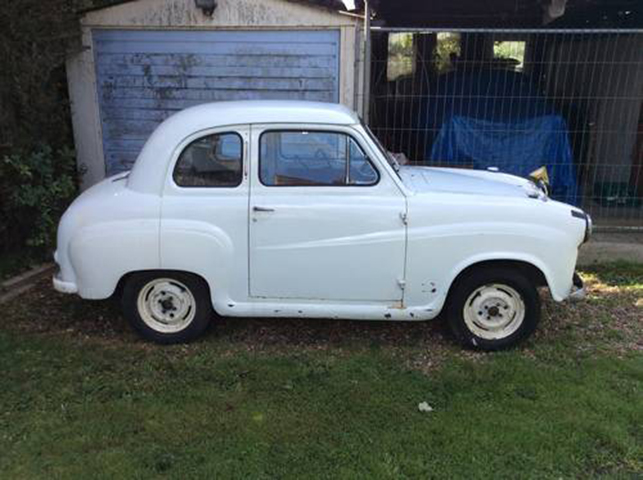 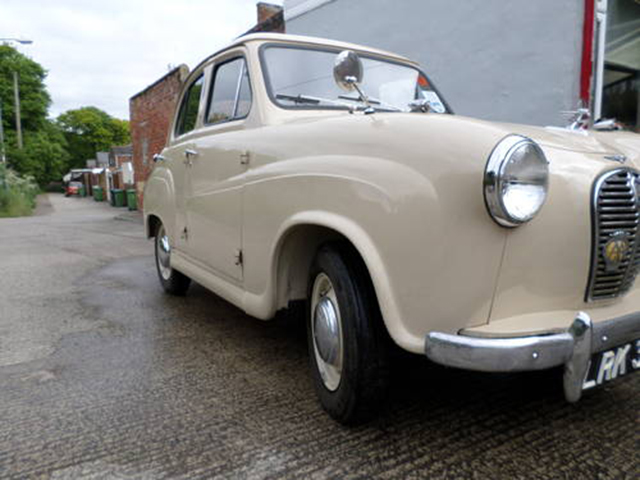 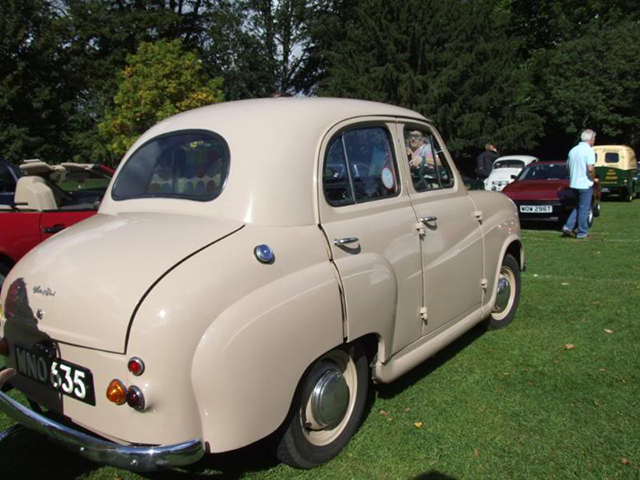 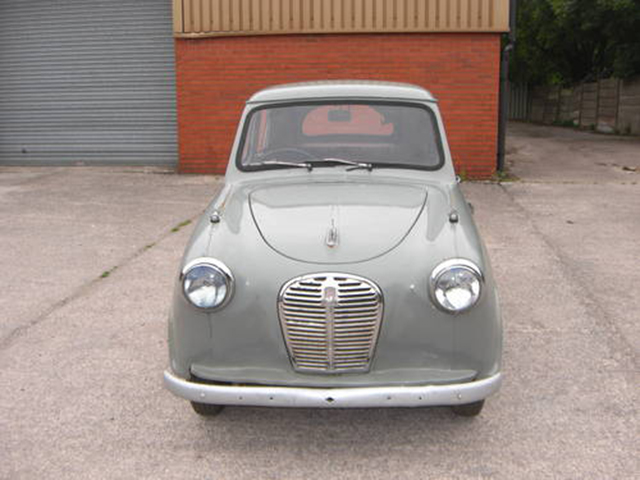 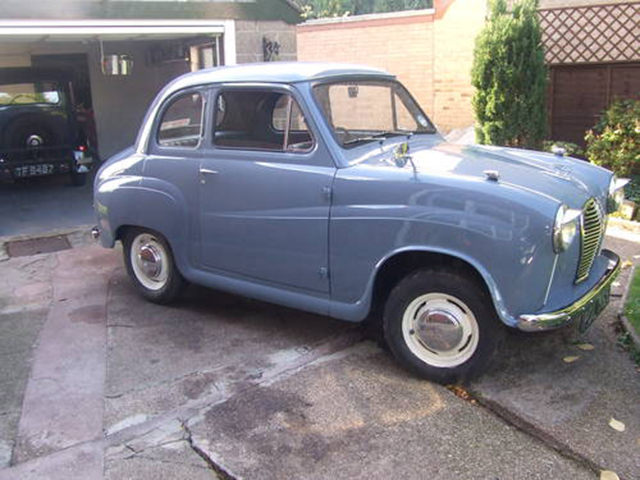 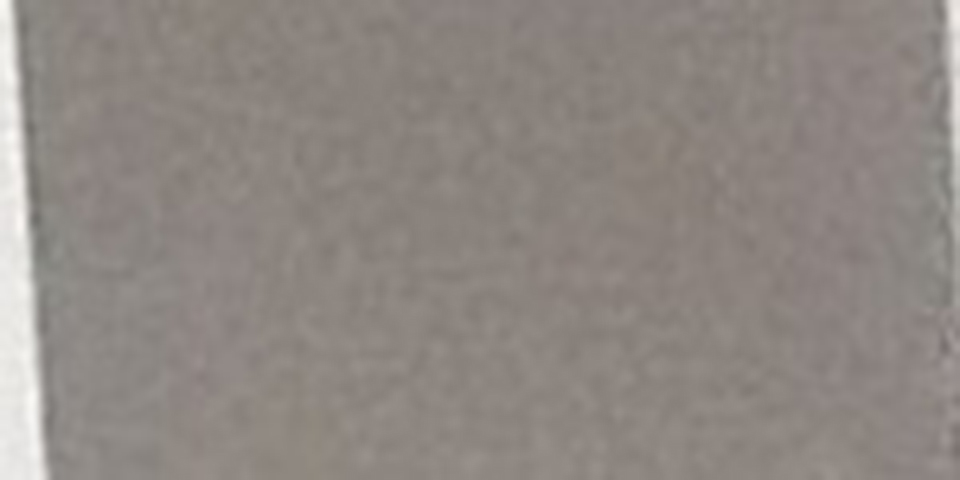 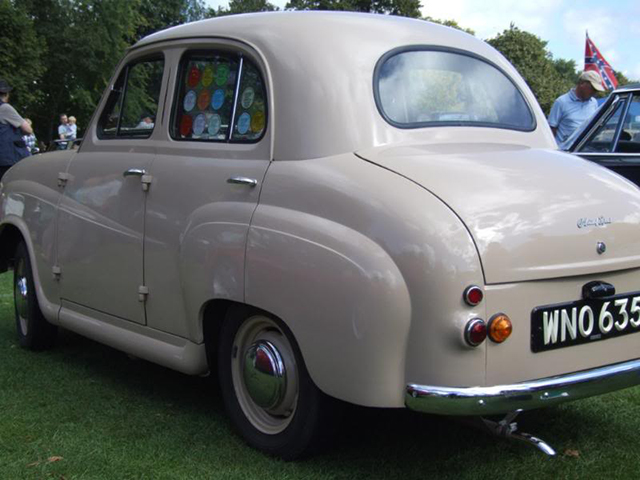 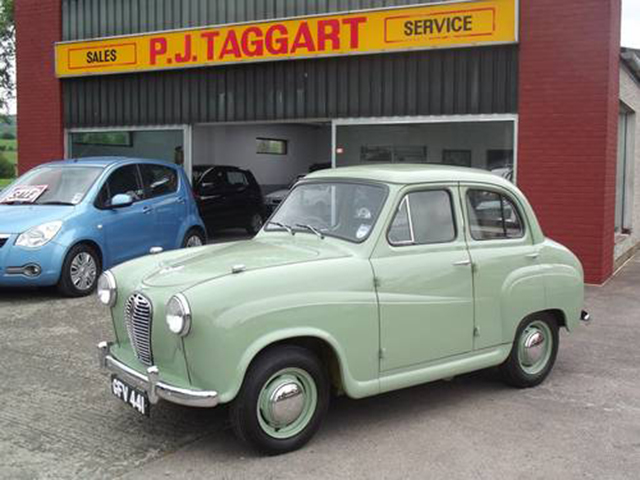 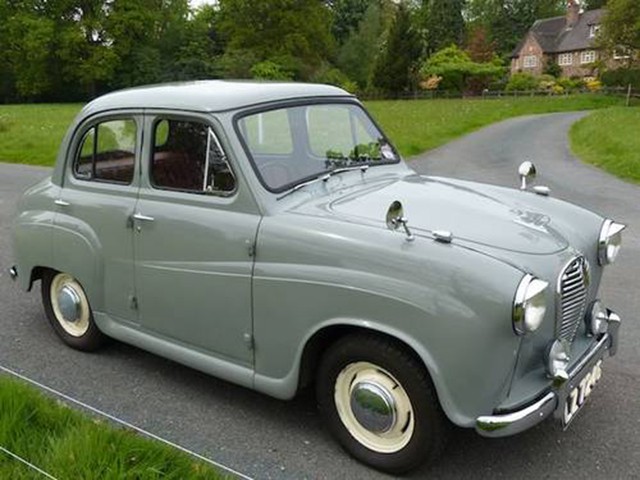 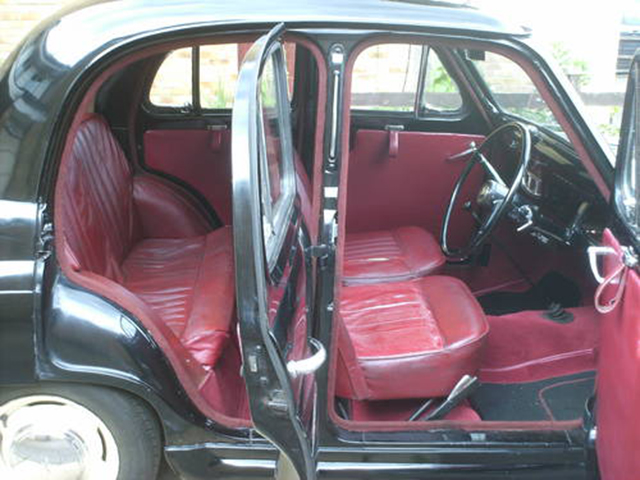 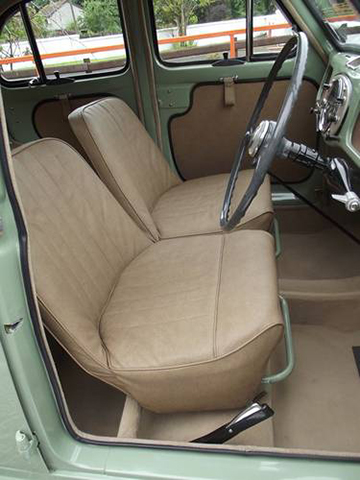 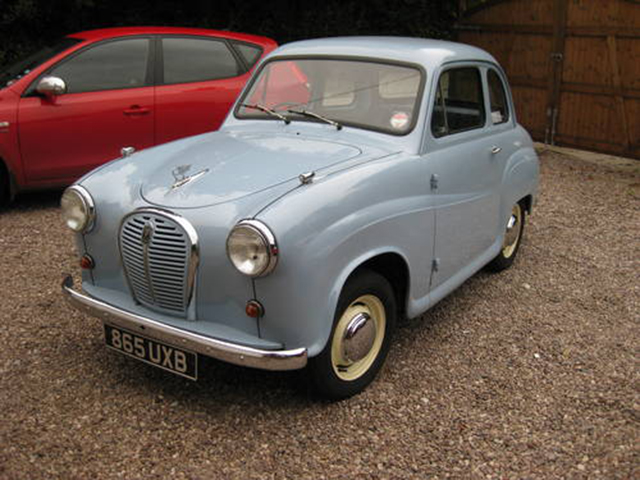 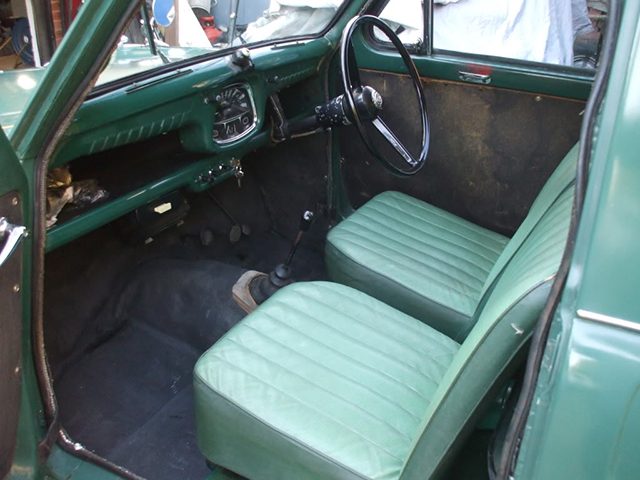 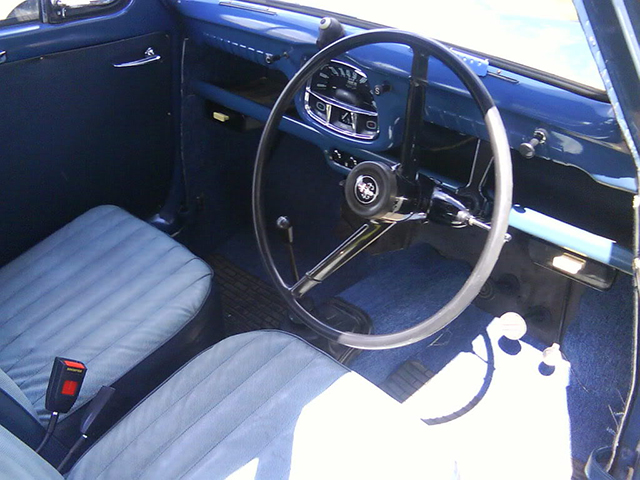 How much is it likely to cost?

Dependent on the options you select above, your final quotation will be between £4,000 and £7,000. We’ll provide an estimate with 20% accuracy.

Why can't you provide an exact cost?

Primarily, because we are trying to keep to a budget for you. Your vehicle will be built as close to budget as is possible. If we were to provide you with a price to simply buy the vehicle, it would be at a current resale value; which would be considerably higher; in this case around £11,000 – £15,000.

This does mean your vehicle will appreciate as soon as you take delivery of it!

However the downside to this is that we cannot anticipate everything until we have your donor vehicle in our hands. Sellers may fudge the truth or simply be unaware of the state of his vehicle. Unexpected costs may crop up.

Its simply the nature of the work we are being asked to do; cars are complex pieces of machinery and its impossible to accurately estimate every variable without giving a very high estimate and working down.

In general our estimates are well researched and likely to be very accurate and of course if one part of the build over-reaches on budget, another part can be curtailed.

As this is a custom vehicle build, we cannot offer a refund. If you decide to change your mind, we may at our discretion sell the vehicle privately and refund you the money you’ve paid.

What else is included?

Your vehicle will be selected either from a suitable model for refurbishment, or a suitable model thats previously restored and close to what you want, dependent on whether the work required is better value than buying a vehicle with the work already done. We’ll then check the suspension, brakes, engine and electrical systems, deal with any rust or repairs, and finish the vehicle with your desired trim and paintwork options. We’ll polish the chromework, replacing if necessary, source all the parts, undercoat the vehicle if necessary and provide it to you in the condition you’ve requested. We’ll provide photographic updates along the way.

What engine work will be done?

Whatever is necessary. At minimum the vehicle will receive a full oil change, new belts and plugs, and the carbs will be set for optimum performance. Dependent on the work requiring done the vehicle may have the plugs re-gapped, the rotor arm, points, cap and/or condensor refurbished or replaced, and in the case of a full restoration, we’ll strip the engine, reseat and lap the valves, and fit new pistons, rings, cranks or any other parts that require replacement. Dependent on your electrical requirements we may upgrade dynamos to alternators, change to electronic ignition, and fit new looms. Generally its wise for the purposes of investment, to keep your vehicle as close to stock as possible but obviously aged parts will eventually dwindle in performance. A full report on the work required will be provided once your vehicle is selected and examined.

What warranty do you provide?

Generally its wise for the purposes of investment, to keep your vehicle as close to stock as possible but obviously aged parts will eventually dwindle in performance. We cannot by the nature of things, provide a warranty on old parts; you should be aware that they are likely to fail at the end of their expected life. We will examine the service history of the vehicle and replace anything that is likely to reach the end of its lifecycle within the next 1-2 years. Otherwise “if its not broke, don’t fix it” is a good adage. All work we do is warrantied in full against error, and all parts provided will be warrantied by the manufacturers for the statutory time.

If we didn’t answer all of your questions, feel free to drop us a line anytime using the Get in Touch button above. Its best that you fill in the questionnaire to the best of your ability so we have enough info to discuss your requirements, but if you are struggling, please call us to discuss the option. These questionnaires are custom-written for your vehicle and needs, and its possible we’ve made a mistake!